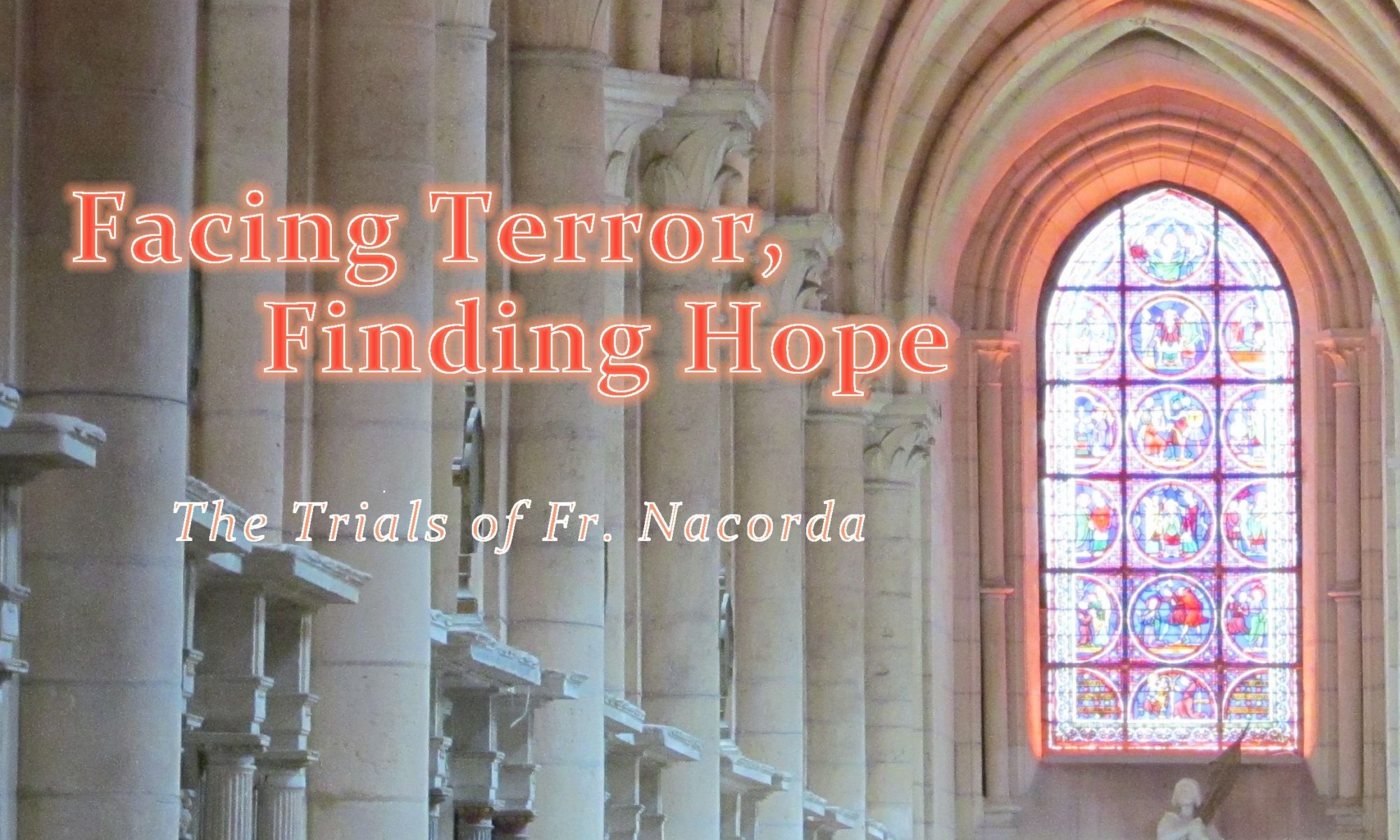 How do we know our faith is really faith? It can be easy for us to say we believe something, but if there’s nothing depending on it, is it a deep-seated truth? C.S. Lewis wrote once that it’s easy to believe a rope is strong if you’re just tying a box. But if your life hung by that rope, your faith in it would be tested to a new level.  In this episode, a priest held hostage by Jihadist militants in the Philippines.

The story of Fr. Cirilo Nacorda is one layered with nuance, spirituality,  and humanity. Over the course of two decades, the Catholic priest has lived through two hostage situations; has helped organize Christian militias uniting against Jihadist militants, and armed himself because of the perceived hopelessness of the situation; and has faced what he saw as deep corruption in the Philippines.  The trials led Fr. Nacorda to a deeper layer to his faith, but not before seriously challenging it.  And even still he’s challenged, just as a chaplain in an Ohio hospital.

I first saw Fr. Nacorda celebrating mass at The Cathedral of St. John the Evangelist in Cleveland, and I’ll talk more about how I heard of him in the next episode.

But the stocky, 60-year-old has a gentle if disarming way about him. He has seven brothers and sisters, and was born, baptized, confirmed, and ordained into the priesthood on the island of Basilan, in the Philippines.

“Basilan is a small island, comprised of 11 municipalities and two cities, population more or less 350-375 thousand. And we are only 28 percent Catholic or Christians there. Muslims are the great majority,” he says.

He’s been in Cleveland since September 2003, as part of an arrangement to keep him safe. On account of his first name Cirilo, people call his Father Loi, so we will, too. He was ordained in 1992, and just two years into his priesthood, he was stopped on a highway by Jihadist militants with the notorious Abu Sayyaf terrorist group.

“That was June 8, 1994, around 7:30 in the morning. We were stopped by this so-called Abu Sayyaf on a highway,” Fr. Loi says, matter-of-factly. “Actually there were already some civilian hostages ahead of us, and they used their vehicles to block the highway so we were forced to stop with my driver. I was accosted immediately by the terrorists. I thought at the start they were military because they were in uniform.”

Fr. Loi says he wasn’t the target, per se. Kidnapping is a known strategy of terror groups for extorting ransom—it’s been used in the dangerous western areas of Pakistan, for example.

And to this day there are kidnappings and ransom.

“There were 16 who were put like a firing squad. I had not seen what really happened, because I and some hostages we were already about 2.5 or 3km away when we heard those shootings, and two days later later we learned that our fellow hostages were massacred…actually including my driver.”

Abu Sayyaf had been linked to al Qaeda, and other terrorist groups, and was a source of continued strife on the island of Basilan, and throughout the region. News reports document skirmishes and developments in a multi-pronged engagement.

And the U.S. in the early aughts sent troops to Basilan in yet another front in the war on terror.

But in 1994, Fr. Loi was on his own. I mentioned he had been a priest for two years because he said had asked God to let him enjoy two years of his priesthood. It’s then that he found himself in a jungle hut, chained, when he heard of plans for his death:

“I was already about two weeks in captivity when I heard that terrorist main leader and some sub-commander talking about beheading my head the following day. Because they were asking ransom from the government and from the church.  They said if the government will not pay for the ransom of this priest, and the church, then we will show them that we are serious, we are going to cut his head tomorrow morning.

“So that was really a very terrible time for me.  That night, 11:30 in the evening, I managed to kneel down–my hands were tied with chain and padlock, and my [feet] were also tied, and there were four terrorists guarding me inside that small hut–but I managed to kneel down, and I was able to pray, and I was praying hard ‘Lord, just give me the strength, give me the courage to accept my fate.’ And that was two years in my priesthood, so I said, okay, I forgot that prayer, but I believe you did not forget what I asked of you. So if this is now the moment, just give me the strength, the faith, the courage to face my death.

“That particular moment I experienced some kind of like a vision.  A small light, very bright, in the corner of that small hut, it start to get bigger and bigger and bigger.  It became like basketball size.  There’s an eyes form, the nose, the mouth, the face started to form, the hair appeared.  And when it was completed I recognized that image…it was Christ, so beautiful. Beautiful face.  I said, ‘Lord, thank you for coming, please help me, they’re going to cut my head tomorrow. Lead me away from these evil people, please help me.’ And you know what, he just smiled, and he disappeared.

“And I don’t know what happened, I was able to sleep well. But early morning when I woke up, about 7 o’clock in the morning, I cannot understand myself, I had a tremendous strength, courage, and power.  I wanted to shout at them, ‘hey, you’re going to cut my head today, I’m ready.’

“That particular moment, it seems I totally surrendered myself to him.  That joy that I cannot express in words.”

Father Loi thought he would be martyred, and felt he was granted a strength to endure that fate.

But he wasn’t martyred, and he wasn’t released right away. He was in captivity exactly two months, and his release came in part because of one of the leaders of Abu Sayyaf wanted him let go.

“But he died four days before I was released. He wanted to release me because I was able to convince the main leader that my mom is half-Muslim, because she was born in Basilan and she knew how to speak—and I knew also how to speak—Muslim dialect,” he says.

Father Loi admits this was a little white lie, but it was the tactic he used to stay alive. He had hoped this would win him favor among the terrorists, along with his strategy of not resisting.

“I tried to be friends with them, because I know love begets love, and I believed at that particular time also that it will work. And it really works. And they said ‘oh, this priest is very respectful…cares for us, and he’s concerned for our problems, he knows also our problems here why we became terrorists…’”

This was buying Father Loi time, making his captors think he was sympathetic to their plight. He said he even found a Koran with an English translation in an abandoned hut, which helped him further his ruse.

But danger remained. The threat of beheading was real, as was other kinds of torture:

A speech from Fr. Nacorda about his decision to carry a gun


We talked a little bit about the reputation of Abu Sayyaf, but it might also be good to hear about its origins, and how it fit into larger problems in the Philippines.

We alluded earlier to corruption in that country becoming a target for Fr. Loi after captivity, but another wrinkle was the group’s connection to al Qaeda, which Fr. Loi says he saw first hand.

“…especially the original one who organized this group Abdurajak Abubakar Janjalani. He was actually influenced by the Mujaheddin because he went to Afghanistan, he also fight there with the Mujaheddin and he was also influenced by—who was this al Qaeda leader?–Osama bin Ladin. I saw Osama bin Ladin two times. In 1985, at that time he was not a wanted person yet, he was able to sneak out and went to our island of Basilan, because Basilan was the place where the Abu Sayyaf started. And I can always remember his face, he was a tall guy, 6-footer I think.”

A #Catholic priest decided to arm himself, and help organize militias in the face of #terrorism in the #Philippines years ago. He's now a chaplain in an #Ohio hospital. More on why he carried a gun, and more of his incredible story: https://t.co/aKUYwVruXX #faith #Christianity pic.twitter.com/3nRPLpL2B5

On why he carried a gun:

“We’re helpless. We see our military are corrupt. We cannot trust our governor, congressmen, mayors. We have to do something to survive, to do practical things. This life is a gift from God, and God wants us to care for this, to protect this, and love this life. So in the process I’d seen that civilians are being killed, kidnapped. We had priests who were killed there. So we had to do something. So that’s my main reason why I armed myself, and I go around and organize the people, and ask them to arm themselves. You see, if you are armed these people cannot just take your life, your family, your property. But if you don’t have any arm to protect yourself, they can easily attack and kill us.”

More excerpts will be forthcoming…