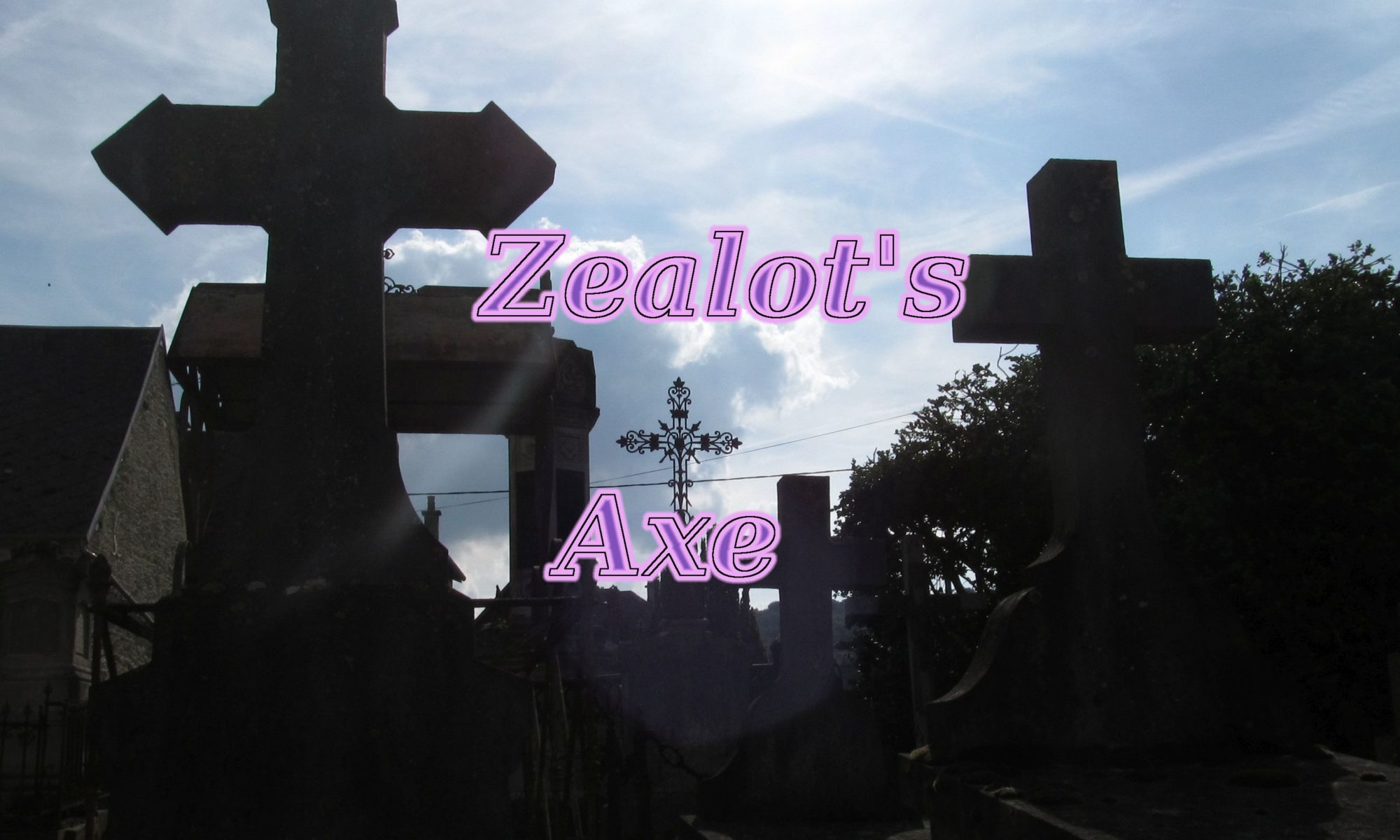 We live in a moment when our faith traditions can lead some people to stereotypes right away. If you identify yourself as anything, a whole host of political or social positions may be thrown at you, or attributed to you, without nuance. This isn’t just a modern trend, of course, and today we’ll hear an extreme example of a lack of religious nuance from Switzerland’s past. The Catholic-Protestant relationship, and the murder of Joerg Jenatsch..in this episode of Faith Full.

In this episode: Zealot’s Axe or The Conversion of Joerg Jenatsch

Hundreds of years ago a man dressed as a bear murdered a Catholic freedom fighter in Switzerland. The details of the crime are somewhat important, but more so are the details of a Protestant pastor who converted to Catholicism on account of his idea of authority and power.

The crime stemmed from a time fraught with religious division during which moderation seemed extinct.

It’s a sharp contrast to today, of course, where it’s not uncommon for Christian denominations to pray together, and discuss the faith from their own perspectives.

On the grounds of an Ohio Catholic seminary, for example, a mix of prayer, conversation, and Christian music form the soundtrack for The Fest, sponsored by the Diocese of Cleveland.

Community groups can set up booths to share news about their credit union or ministry or whatever;  there are games; rosary prayer groups; and, yes, music.

The headliner at a recent Fest was TobyMac, a high-energy artist who blends hip hop and pop vibes to wide acclaim. Lead singer Toby McKeehan was part of the group DC Talk formed with two others at Liberty University.

As he looked over the crowd of Catholics and Protestants enjoying an afternoon, TobyMac mentioned he was so happy to see the faith groups together–praising God together. Another music group a year before (headed by one of TobyMac’s DC Talk band-mates, in fact) seemed a little more surprised that Catholics were there; happy, but a bit surprised.

I’m not sure why it was surprising, but maybe the history of division within Christianity still ripples forward.

Hundreds of years ago Zurich was the center for the Swiss Reformed Church. It was after all the home of Ulrich Zwingli, a prominent Reformation leader. It’s also a relatively short ferry ride from Rapperswil, home of a Capuchin monastery where we met Brother Fridolin in episode one.

I had spoken to him while reporting for World Radio Switzerland, and he told of the monastery’s founding, stationed as a Catholic outpost amid a large Protestant population.

“450 years ago it was for the Catholic-Swiss in central Switzerland it was very important that Rapperswil was staying to the Catholics,” Brother Fridolin says.

Capuchins had thought at first of building the monastery on the other side of the city.

“People from Rapperswil were saying no it’s not good, because around Rapperswil was Protestant farmer people,” he says, adding that the monastery is set just 200 meters from edge of the state or canton of Zurich.

“The situation of the house here was a provocation from the Protestant Zurich,” he adds.

The provocation may have been in the past, as Brother Fridolin said, not so much today.

But there may be something to learn or at least think about from that past, namely in the 17th century, and the heat of the messy and devastating Thirty Years War.

The war ostensibly began with the Holy Roman Empire trying to impose Catholicism by force, and Protestant powers fighting back. This is oversimplifying, but the point is to pay attention to the religious and political conflict.

Brother Fridolin’s forefathers, so to say, in the Capuchin order were accused of being trouble-makers at that time, maybe because of their ‘provocation.’

A 19th century Swiss historian and theologian Philip Schaff wrote, “Jesuits and Capuchins stirred up the hatred of the ignorant and superstitious people against the Protestant heretics.”

The Thirty Years War was filled with shifting alliances of great European powers jockeying for territory under the cover of religious reasoning, or at least a manipulated interpretation of faith.

In this toxic atmosphere, the pastor and freedom fighter Joerg or George Jenatsch comes of age.

The Alpine village of Zuoz in the Swiss canton of Graubünden is right up the way from Samedan, where Jenatsch’s father was a Protestant vicar. The residents of these villages, even some of them today, spoke Romansh, related to Latin, and still one of Switzerland’s official languages.

Graubünden wasn’t yet a state or canton as we now know it, and was divided at this time by religious lines. It was also strategically important for all those great powers fighting it out. Swiss alpine routes for centuries were vital for moving troops.

Jenatsch went to Zurich in 1610 at the age of 14 to further his studies to become a pastor in his own right.

A book on Jenatsch called “Jenatsch’s Axe” has great insights into this time. Author Randolph Head writes that Jenatsch would be quizzed on his knowledge of Reformed theology, but also for his energy and zeal in fighting Catholics.

“Spiritual and political means were parallel tracks to the same goal,” he writes.

Jenatsch is said to have joined a group of confrontational pastors, and became a religious zealot, according to some accounts. And in his desire to have a more confrontational and active opposition to Catholic forces he was either fired as a pastor, or he may have quit to become a military leader.

“He was kind of an ambiguous person in history,” says Thomas Reitmaier, the head archaeologist for the canton of Graubünden when I spoke to him in 2012.

“In the 19th [century] he became a myth for freedom and for the new canton of Graubünden. In 20th century he was criticized for he was a murderer and so on,” Reitmaier continues. “I think it’s quite an ambiguous person in history but for the Grisons of course it’s one of the most well-known persons in history, and so also the grave where he’s buried in the cathedral is very important.”

Jenatsch led forces to attack a prominent pro-Catholic leader Pompeius Planta, and legend says he murdered him with an axe, but by some sources it’s not totally clear he did the killing.

This is clearly an escalation of Jenatsch as a military leader, or a freedom fighter, and political player, and not so much a pastor.

He ends up taking part in high level negotiations between the great powers, trying to preserve his home canton in one respect, but also figuring out who he is becoming.

Jenatsch converted to Catholicism after spending time in a Venetian prison, and read deeply the Bible and the works of St. Augustine.

He saw authority in Augustine and the Church.

The researcher Randolph Head wrote that “Jenatsch was most certainly a man of his times – and those times were characterised by instability and a crisis of identities…but clearly, his personality was suited to those times, and allowed him to advance socially and economically.”

As he rose in stature, Head and others argue that Jenatsch would’ve found the Catholic institution of the time more accessible and favorable.

It’s interesting Augustine was part of his conversion.

Augustine was from a respected class of Roman citizen, and wrote “it is a failing in the soul of one who is so perversely in love with other peoples’ applause that he despises the voice of his own conscience.”

This passage seems to draw attention to one’s obsession with ego, or fame, or others’ acceptance, or power, and say that those things miss the point.

Another Augustine quote: ”beyond doubt it is greater felicity to have a good neighbor at peace, than to conquer a bad one by making war. Your wishes are bad, when you desire that one whom you hate or fear should be in such a condition that you can conquer him.”

The Man and the Myth

The myth of Jürg Jenatsch spread in popular culture, books, film, but the basic story line is constant: this powerful political player, freedom fighter, and Catholic convert was murdered during Carnival or Fastnacht.

Some reports say one killer was dressed as a bear.

And the murder weapon was an axe, perhaps the same axe used by Jenatsch in the Planta killing years before.

“So it was kind of a revenge or something like this, no one knows exactly,” the archaeologist Reitmaier says.

I ask if he thinks it was a religious conflict happening at Fastnacht.

“It could be of course, that is the background of the war, and all these conflicts between whole Europe, Austria and Spain, and of course Germany, French, and the Grisons was involved in this,” he says.

Reitmaier and a team of researchers saw a chance to link myth to reality by looking into Jenatsch’s murder to see if a body in the cathedral of Chur, the capital of Graubünden, was as its grave marker said.

“The first excavation was done by Erich Hög. He was an anthropologist from Zurich, and he did the excavations at the end of the 50s,” Reitmaier says. “He found and excavated the body, and described it, and did lots of research, but none of these papers done by Erich Hög were published, so no one knew did he really find Joerg Jenatsch? Is it a real person? Where was the skull? It was kind of a myth the skull was somewhere in Switzerland, no one knew.”

Reitmaier requested to exhume the body again, to coincide with renovations at the cathedral.

In the meantime experts looked at clothing and artifacts that had been buried with the body.

“We tried to get some DNA sample of blood remains on the equipment, on the clothings, but it didn’t work,” he says. “So we tried to get the permission at the Bishop’s office to reopen this grave.”

DNA samples were taken from living Jenatsch relatives, and testing concluded that yes, the remains in the cathedral matched Jenatsch. There was a head injury from an object—maybe an axe—and a facial reconstruction matched a painting of Jenatsch.

It was likely a horrible crime of revenge, fueled by a warped idea of power, politics, and religion…from a time when Catholics and Protestants were truly at war.

So at a Christian festival in Ohio, Protestants and Catholics come together to hear music and have a good time.

Catholics or anyone could participate in rosary groups, say confession to waiting priests, or pray at Eucharistic Adoration—showing devotion to Jesus Christ in the form of the Blessed Sacrament.

Not every denomination practices their faith the same way, and there are serious discussions theology, but at this festival it seems it’s okay just to pray together in various forms.

In Mark chapter 9, Jesus’ disciples are said to have tried to stop a man exorcising a demon in Jesus’ name, because he wasn’t a member of the group.

But Jesus says to let him go. “Whoever is not against us is for us,” Jesus says. “Anyone who gives you a cup of water to drink because you belong to Christ, amen, I say to you, will surely not lose his reward.”

Catholic Bishop Robert Barron said in a homily about this scripture passage that this is about keeping our eyes on the mission.

The big picture in the Christian tradition should be devotion to Christ, and following His teachings, whether you’re in an Alpine village or a music festival in Ohio…or anywhere in between.